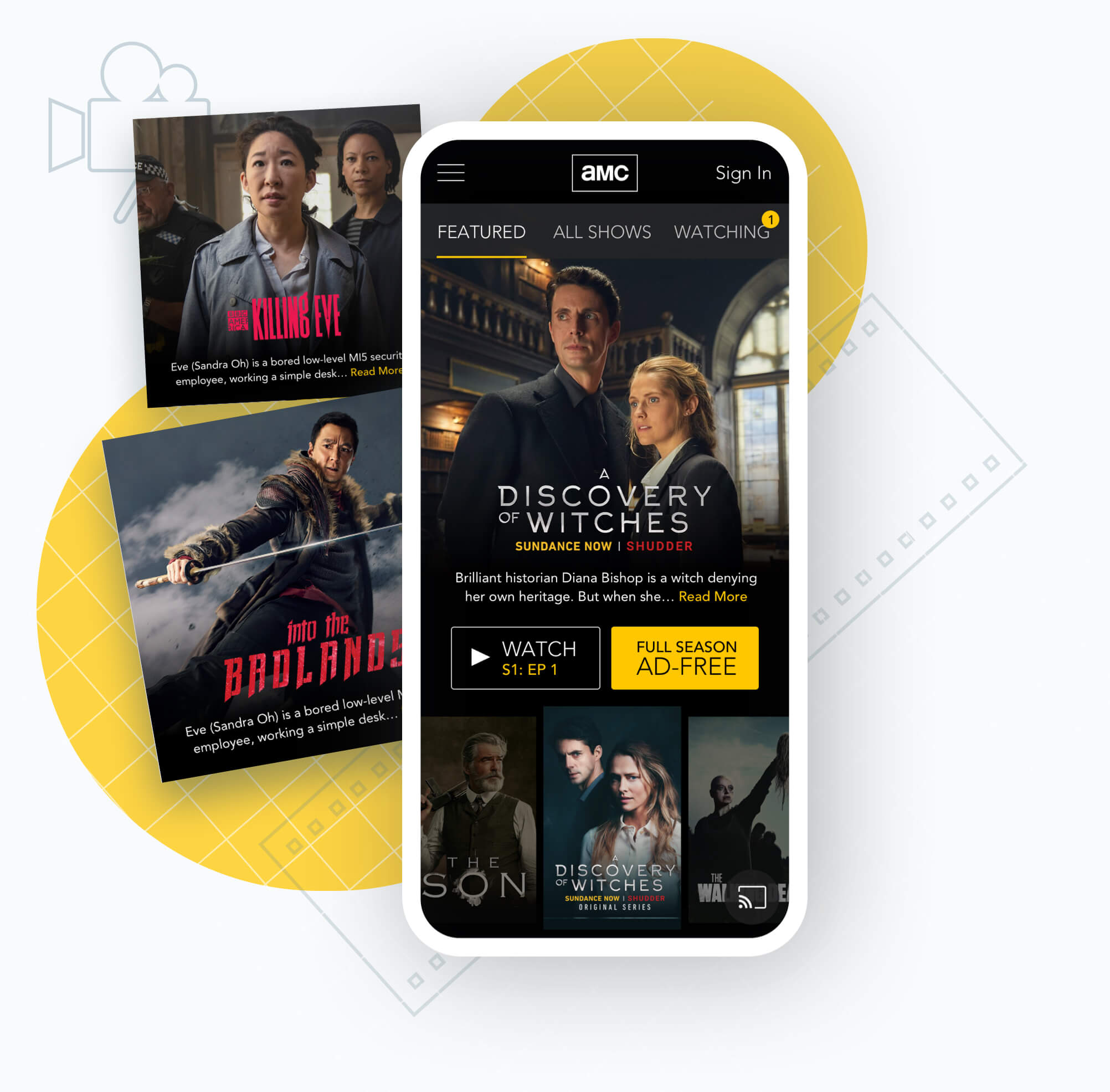 After evaluating performance metrics on its mobile MVP, AMC sought to improve the app’s overall effectiveness while updating the visual style to be in line with new brand guidelines. As a starting point, I was tasked with re-designing the home screen to meet the following business goals: 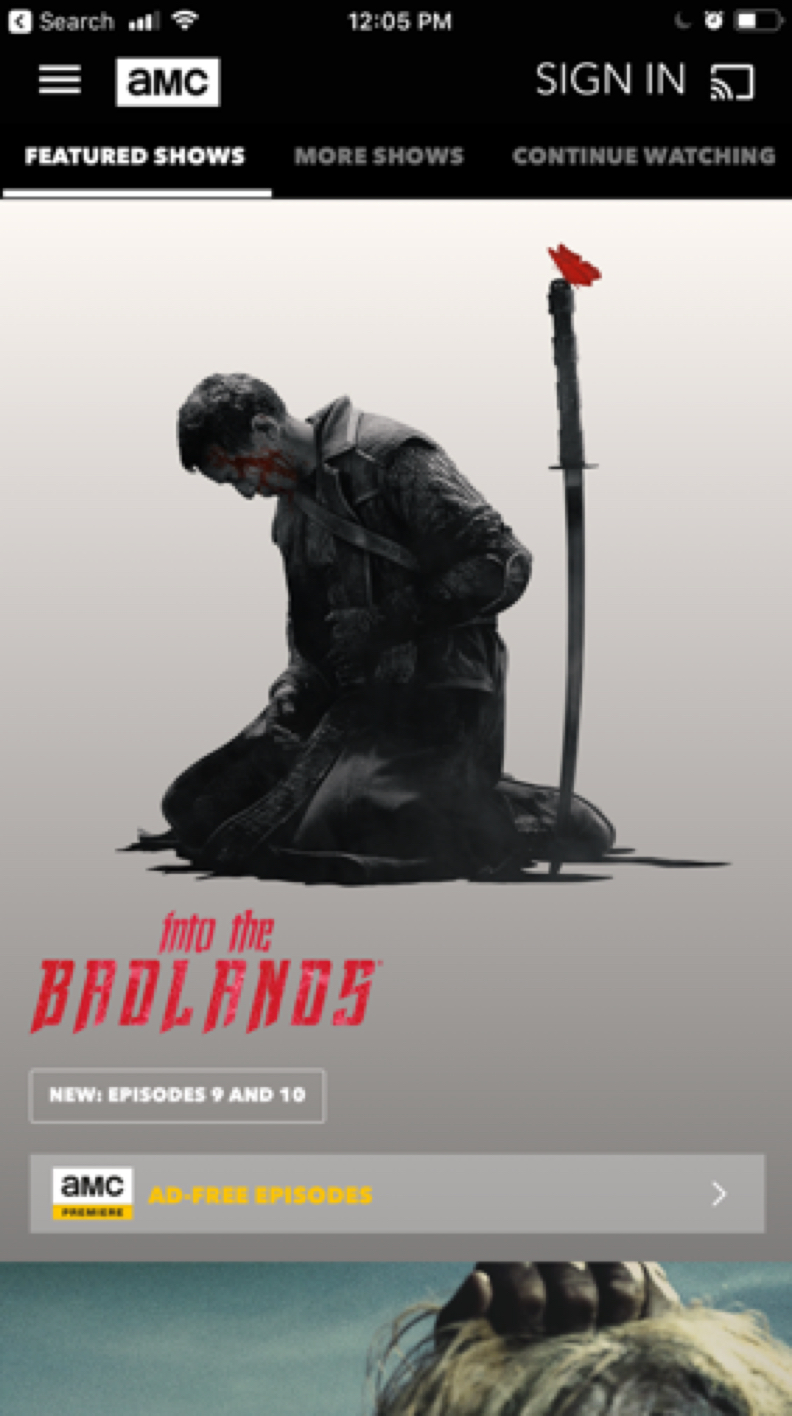 This was a two-day design evaluation that I completed for AMC’s product director. As a solo designer, I owned the project from research through final UI design.

Once I had gathered the business requirements and tested the existing app as a whole, I looked to gain some insights from actual users in order to gain a broader view of its reception and potential usability issues. I showed the screen to several other people in my network who watch at least one AMC show and took notes as they gave it a test run. Based on a combination of questioning and observations, I extracted the following key insights:

I studied a number of related apps that stream movies and TV shows to consumers, including Netflix, MTV, CBS, ABC, Roku, and Vudu. My goal was to see what UI conventions and features were integral or useful and could potentially be adapted. However, I also paid close attention to what did not seem to work well, both from a visual and user experience standpoint. Conceptually, I liked the rotating carousel feature of MTV’s app. It offered a way to scroll through show in an engaging way. However, I found the layout and visual design choices to be more confusing than helpful.

As I brainstormed ways to address the business goals and user needs while vying for the spotlight amongst potential competitors, I identified a number of key opportunities to transform the AMC homepage experience. I highlighted these opportunities in an annotated wireframe of a new design. 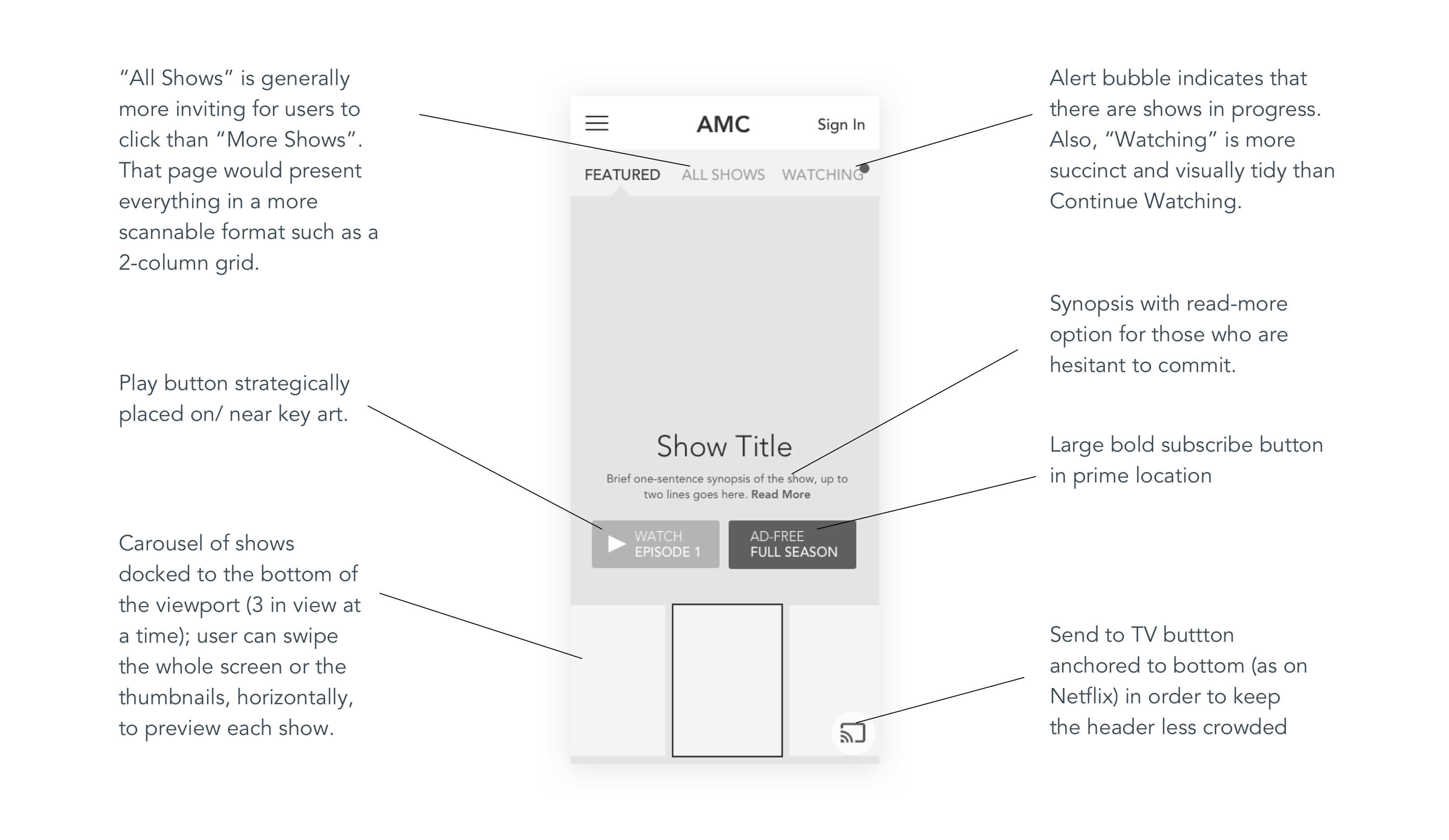 After some preliminary testing of the wireframe, I created a high-fidelity mockup of the home screen, keeping the style in accordance with overall brand guidelines and ensuring that the crucial “Ad-Free” button really stood out. However, I wanted to see if it was possible to be more economical with the space at the top of the screen in order to allow the key art to stand out further, especially on shorter screens. So I decided to draw up two additional header options. The drawback to Version B is that it uses icons instead of words, which users would need to be able to discern easily. Version C is similar to Netflix’s app, so I surmised it might come across as less unique. 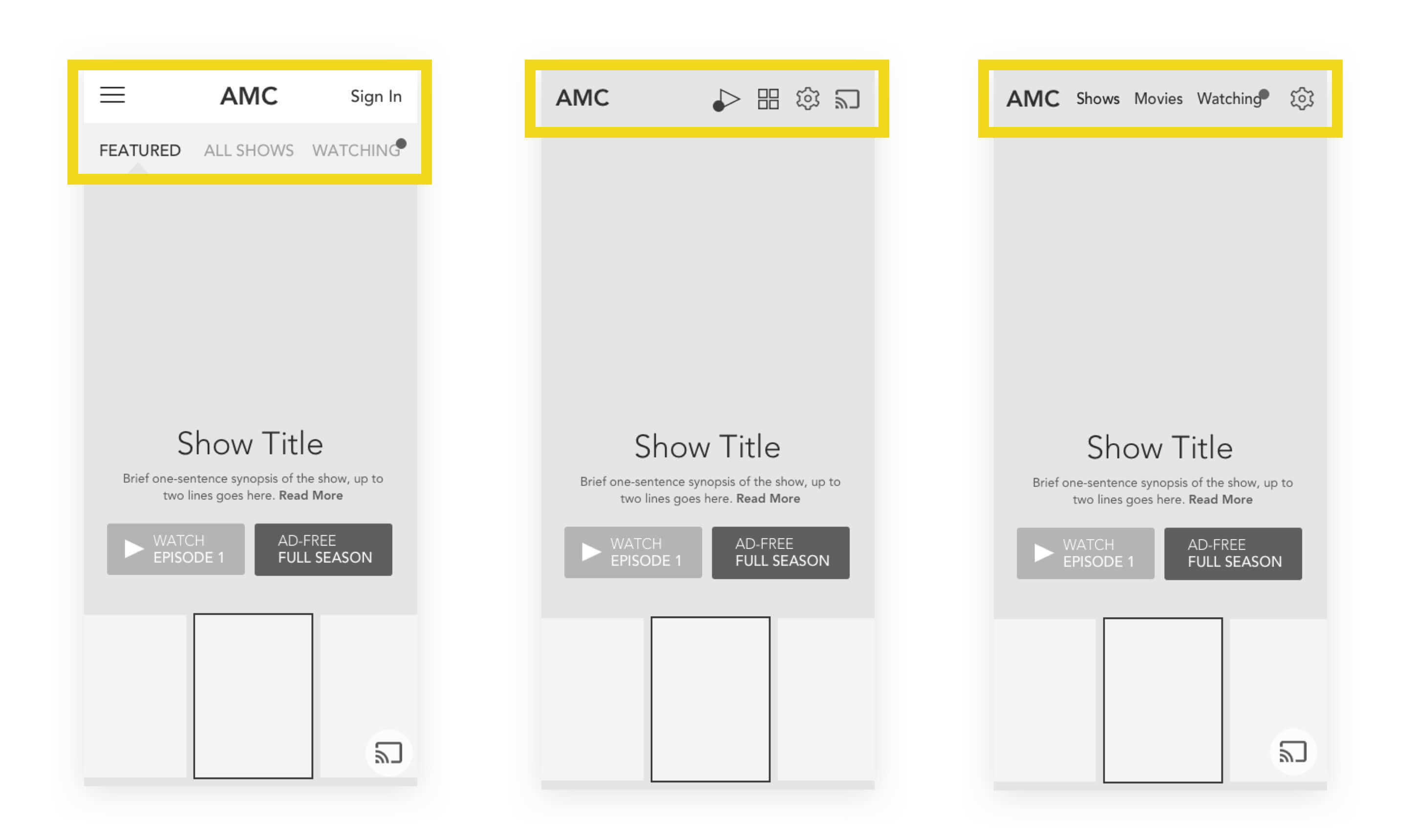 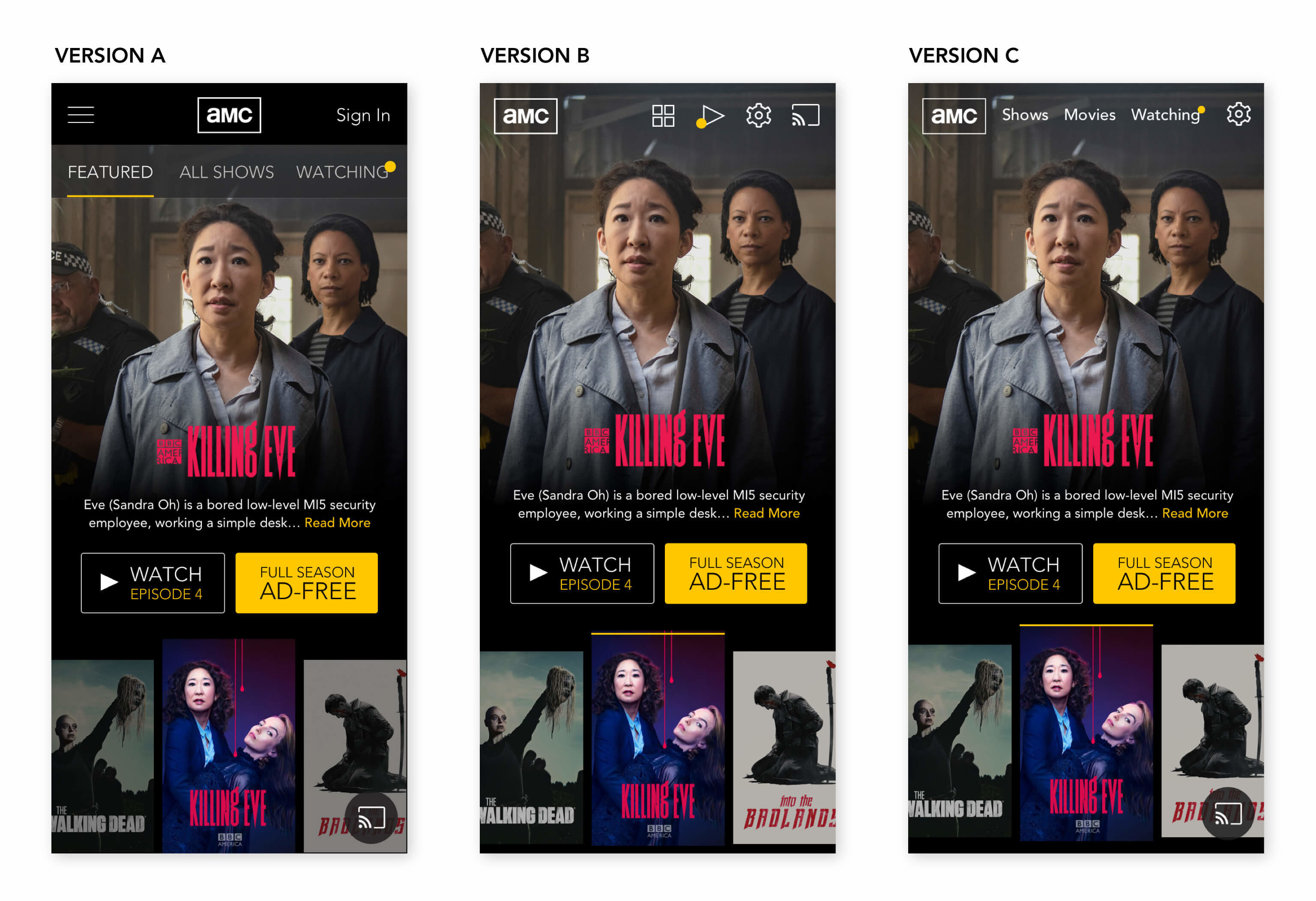 I tested all three versions of the design with users from my original research group. Overall, they saw them as a big upgrade from the current home screen. Users preferred Version A overall as they felt it was a “stronger” header and liked seeing the logo and navigation centered. Version B was their least favorite because the play arrow icon was not easily cognizable. In addition, they raised a few additional points of confusion:

Since Version A was the favorite, I focused on making tweaks to that version as follows: 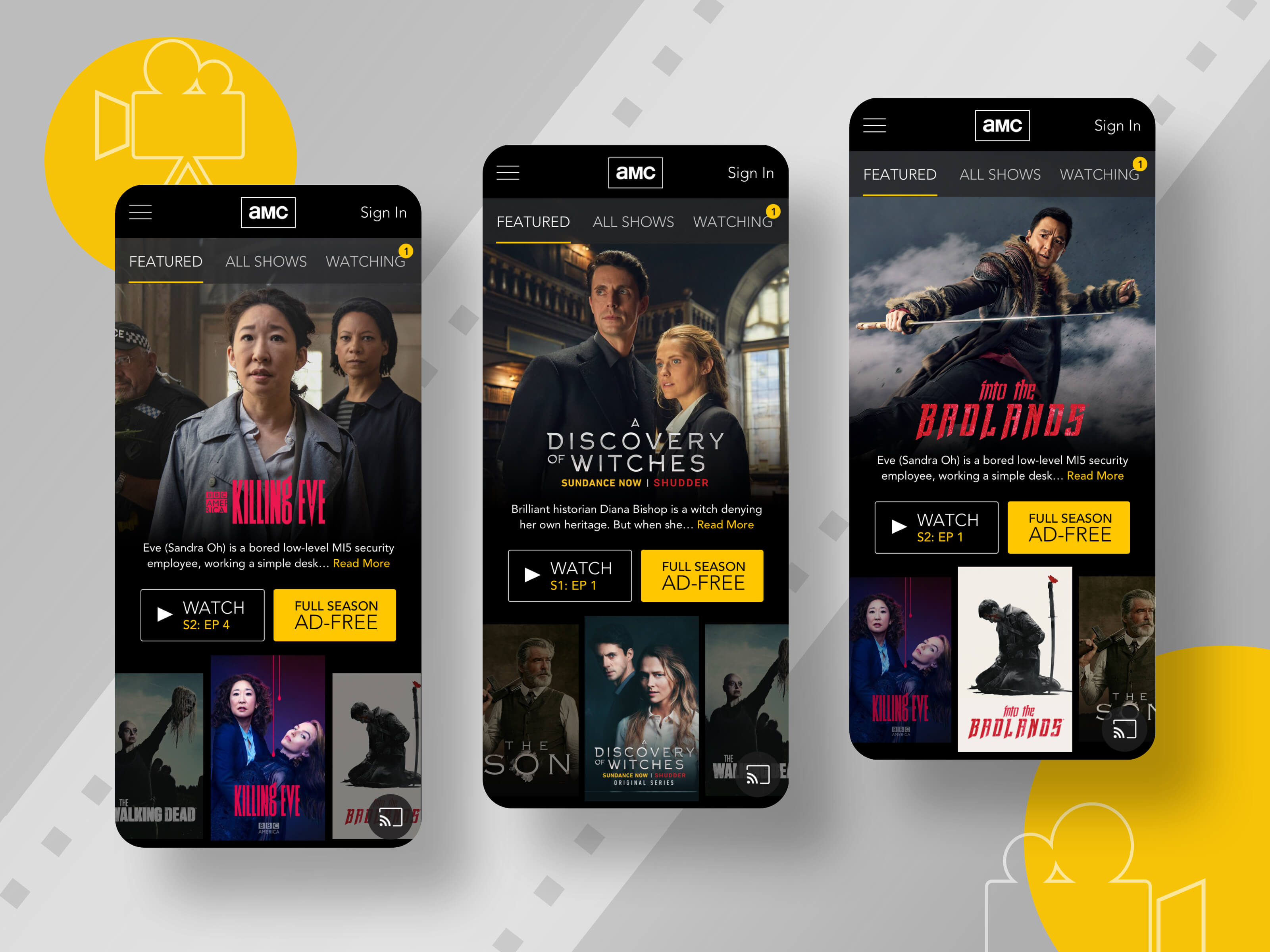